Guest post at Butter with a Side of Bread!

Check out my guest post at Butter with a Side of Bread today and learn how to make easy peach slurpees. 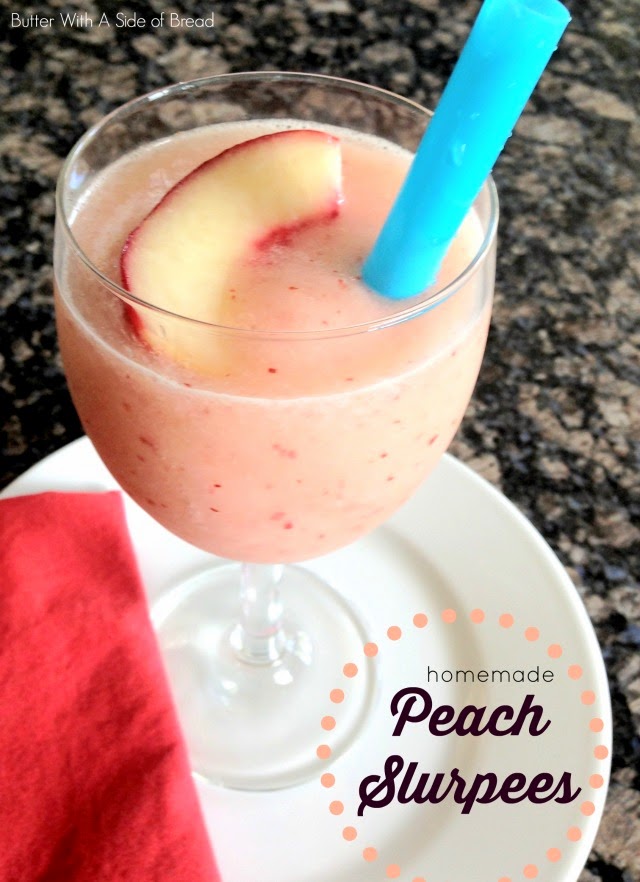 Check out my Inner Pioneer post over at feminist Mormon housewives on how to harden off plants you grew from seed.  If you don't harden off seedlings, they'll die when you plant them outside.

Hardening off plants
Posted by Alice at 8:22 PM No comments:

I have been wanting to post about the new garden, but between the rain and other delays, there's not a lot going on yet.  We've gotten the yard mostly graded, and the raised bed pieces are being worked on (we're getting a unused storage tank from work sliced into rings, which we'll squash into ovals to use as raised beds).

Last weekend we did get the chicken coop moved which was a pretty big job.  Here's my Mister using the tractor to move the chicken cube (someday it's going to have a roof and siding).  It wasn't located quite legally- too close to the other shed, so we moved it to be safe and legal- and also to give the chickens a better set up in the winter- last winter their food and water area was shaded by the coop, and they didn't get much sun.  This will be much better. 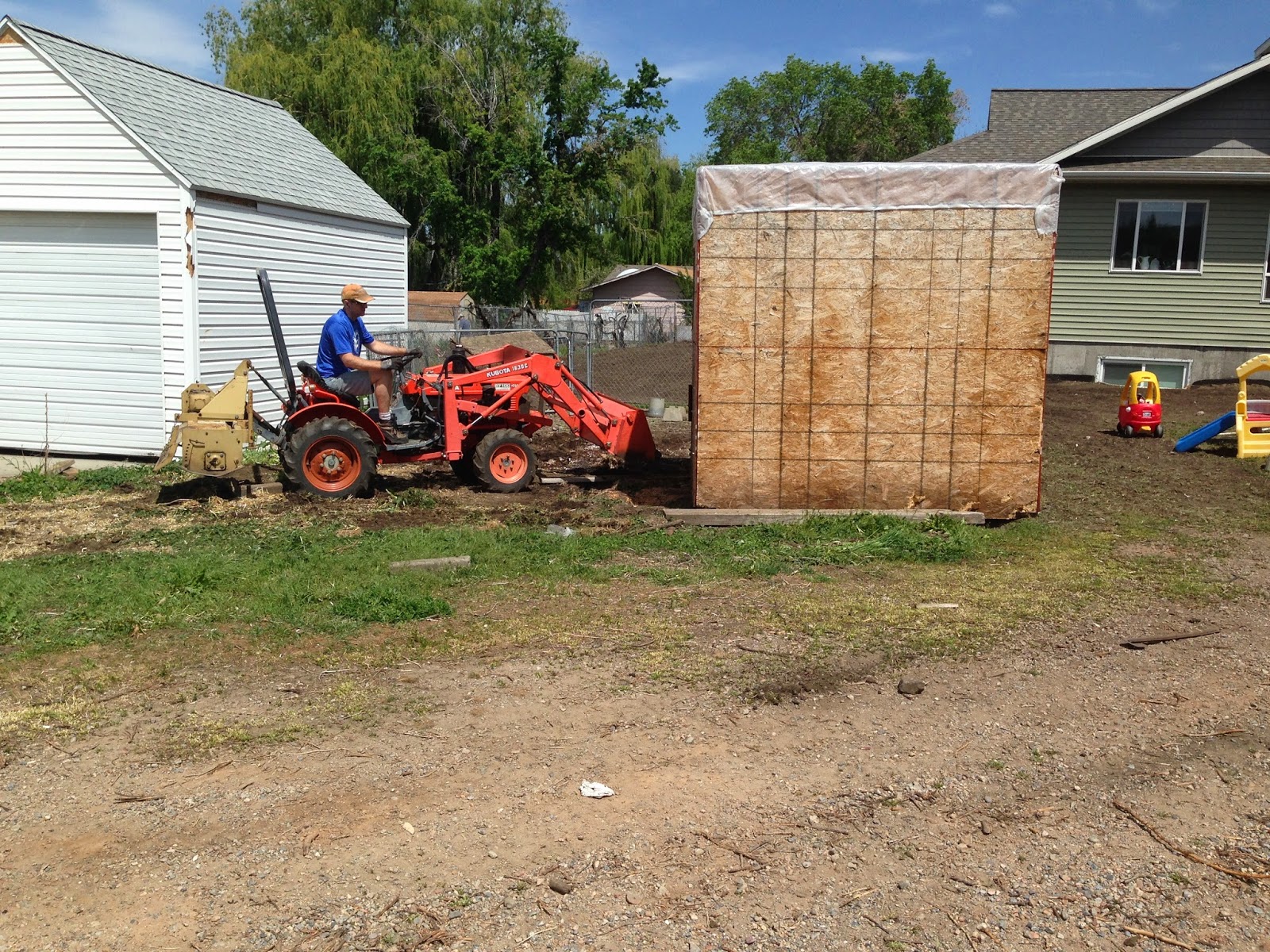 While we were moving the coop the chickens were all off dust bathing.  We thought these looked dead.  Funny chickens. 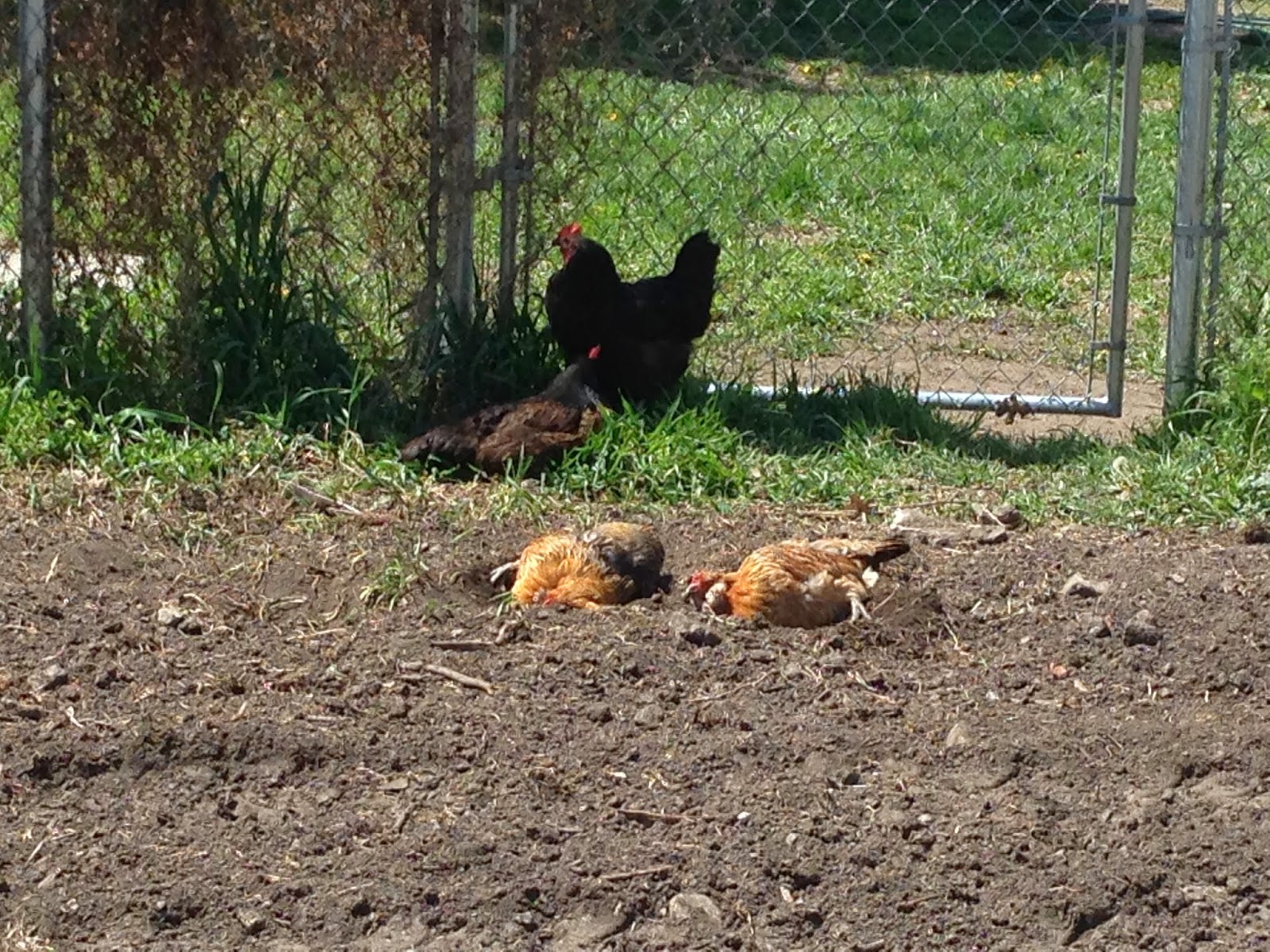 We also moved mama hen and her chicks, and gave them a little free roam time.  They were pretty cute. 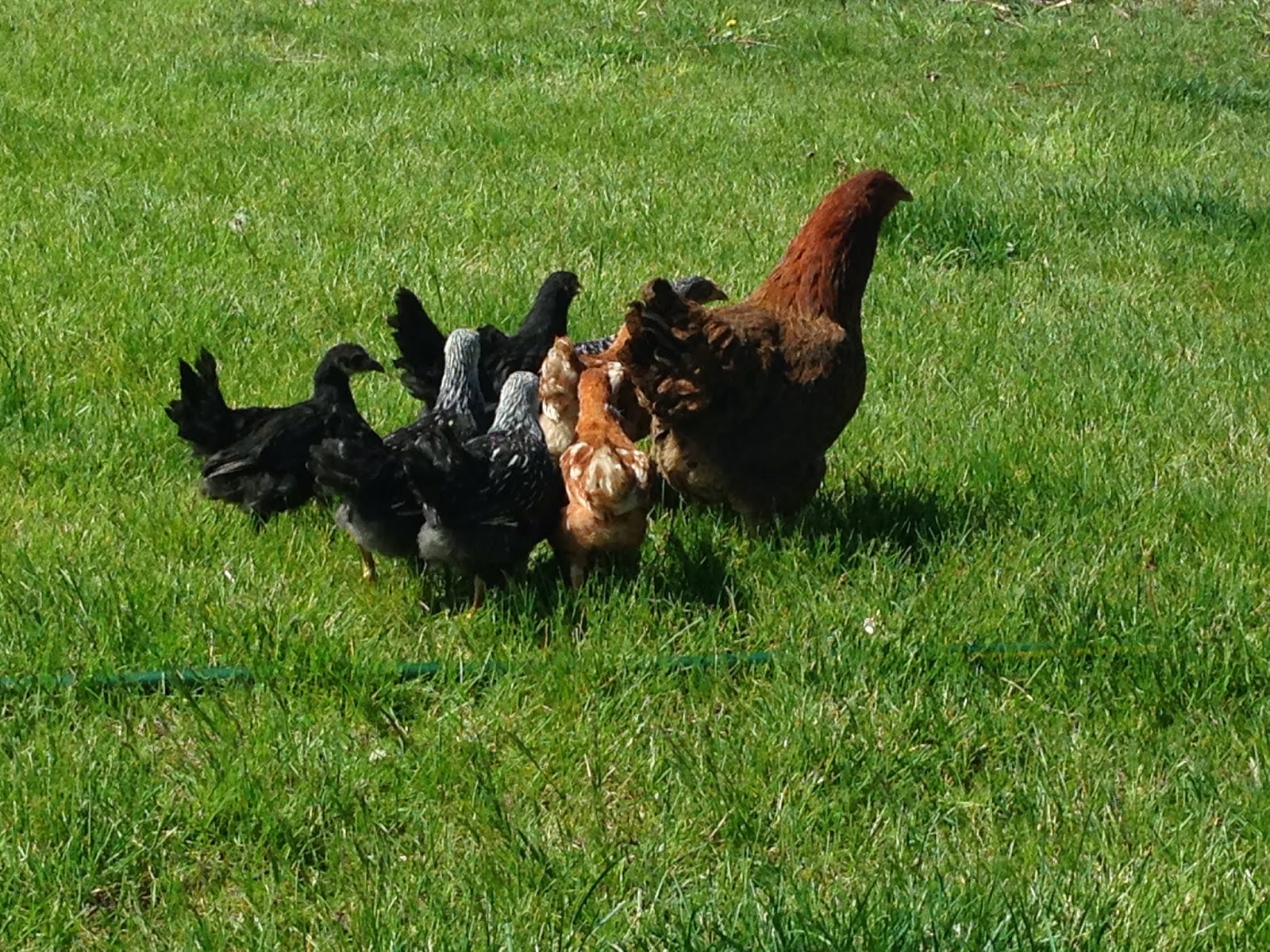 One sad job was to "off" the rooster.  We aren't allowed roosters, so when Buffy the Vampire Slaying Chicken, turned out to be a he, we were pretty sad, and put off the inevitable for as long as possible.  With warmer weather though we, and the neighbors, started sleeping with the windows open, and 5am rooster crows just don't work.  Goodbye big guy.  You were a majestic creature. 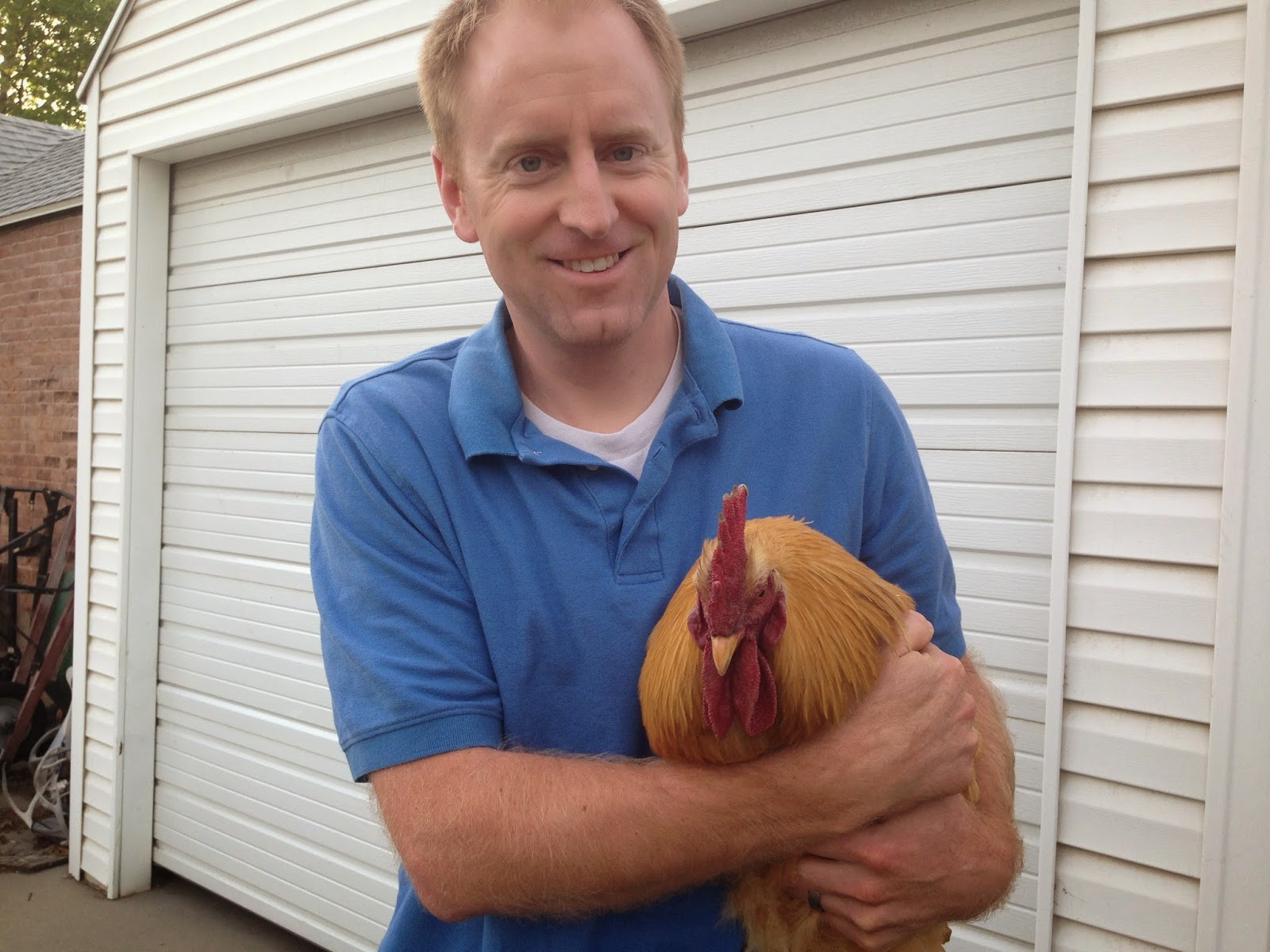 One thing that made killing Buffy a little easier was that we have a broody hen, so we gave her some eggs to sit on (we also took a bunch over to the elementary school for a class to try to hatch- they have an incubator).  No idea if we'll get any chicks out, but can't hurt to try.
Posted by Alice at 9:42 PM No comments:

Labels: Chickens? Those are Parakeets.

While my husband took care of dinner, I decided to make a cake.  Inspired by the meyer lemon my friend gave me from her parents' lemon tree.  (Oh to live in a climate that could grow things like lemons.)

The cake recipe was pretty straight forward, and I didn't get any pictures.  It's a Lemon Cake from Martha Stewart.  I used lemon zest that I had in the freezer so I could save my one lemon for topping the cake.  While the cake was baking, I thinly sliced the lemons, picked out all the seeds, and combined them with 1/2 cup of sugar and 1/2 cup of water.  Bring to a boil and simmer for 25 minutes, then use a slotted spoon to move the lemon slices to a piece of wax paper.  The remaining syrup gets a little more lemon juice added to it, then poured over the cake while still warm.  Then put the cake in the fridge to cool so you can frost it. 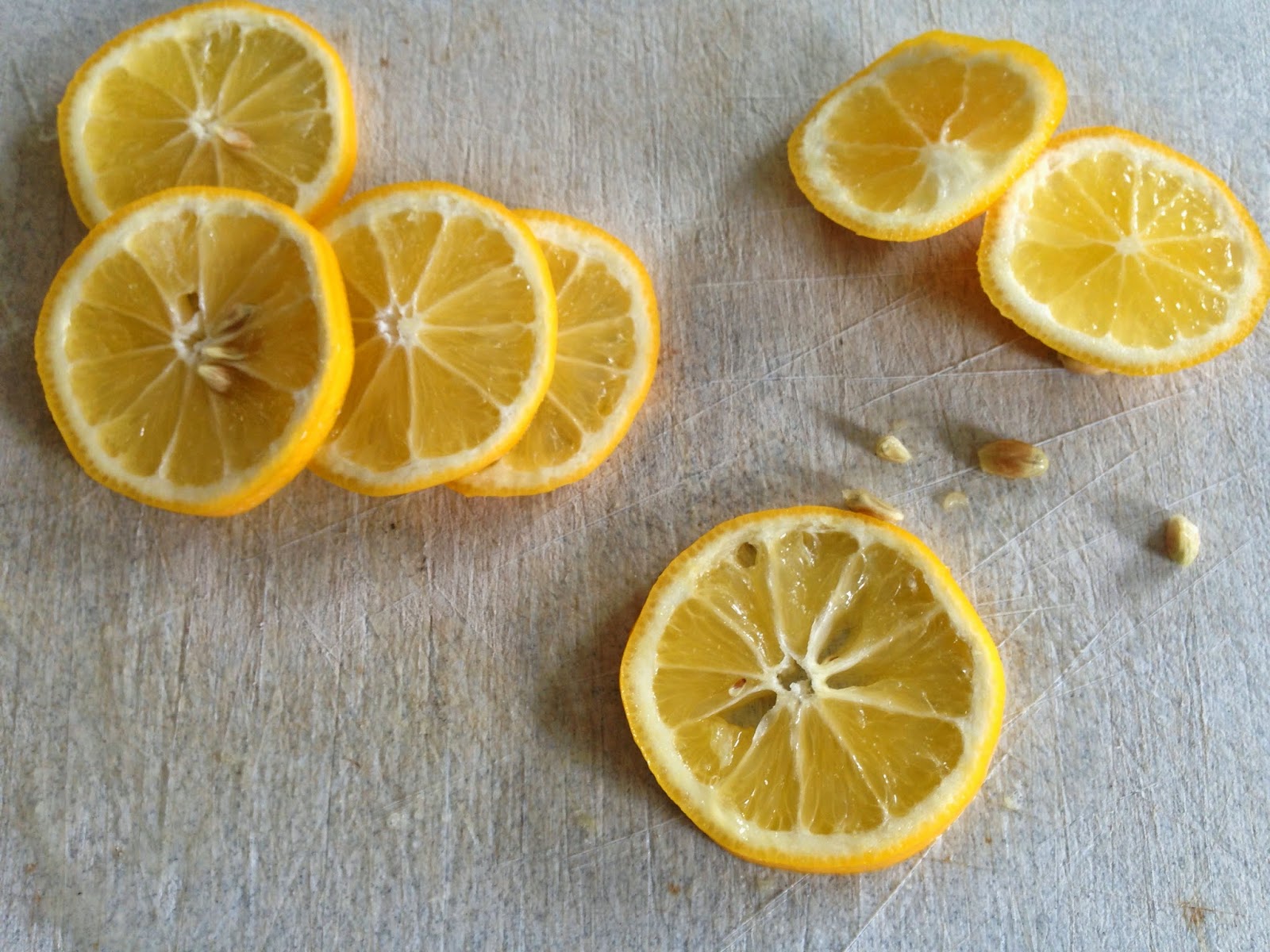 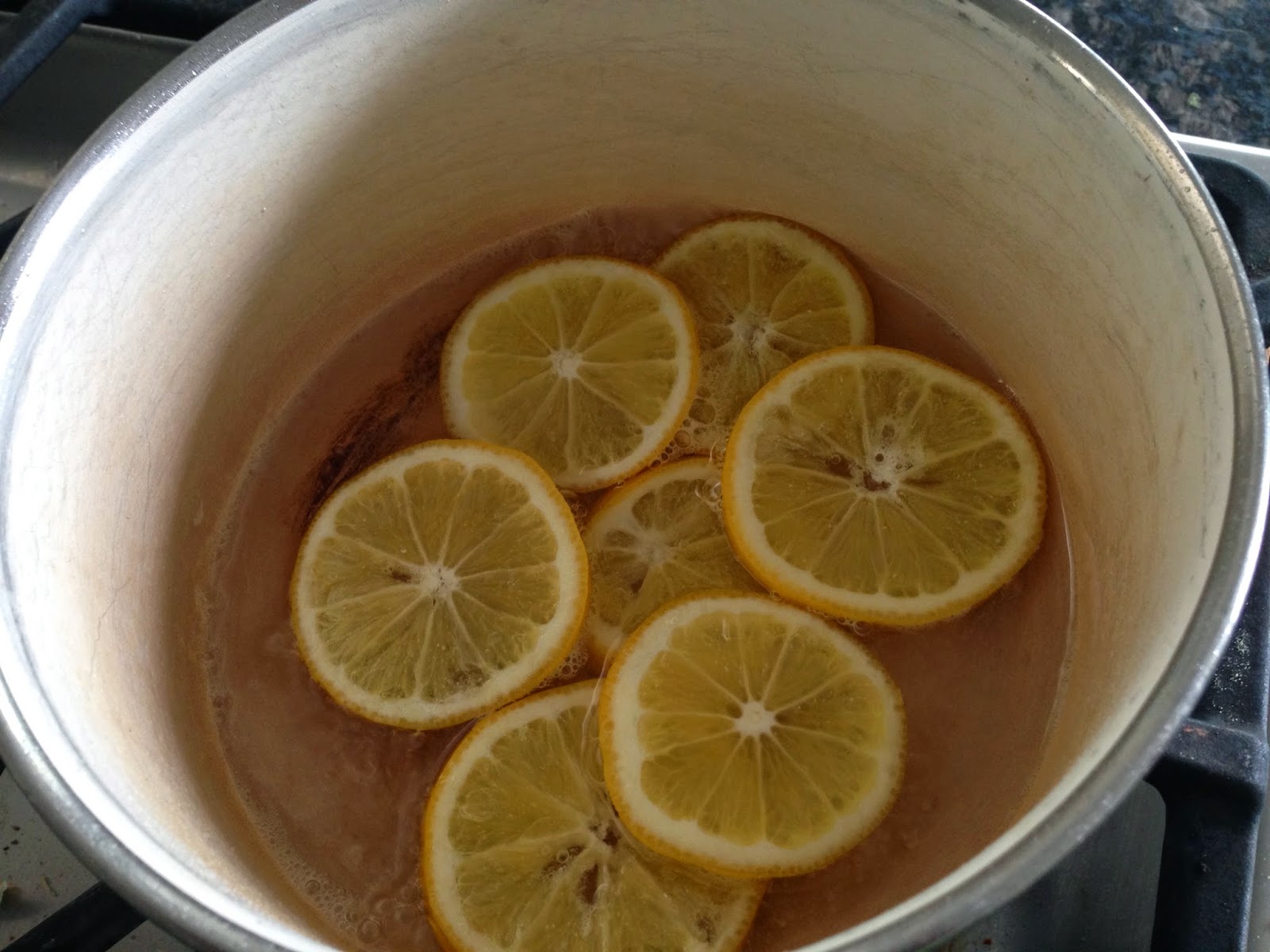 The whipped frosting recipe also came from Martha Stewart.  I don't think I whipped mine quite long enough- it was more meringue-like that I think it should have been, but it was very good.

All it is is egg whites and sugar and water.  Heat over double boiler to 150 F. 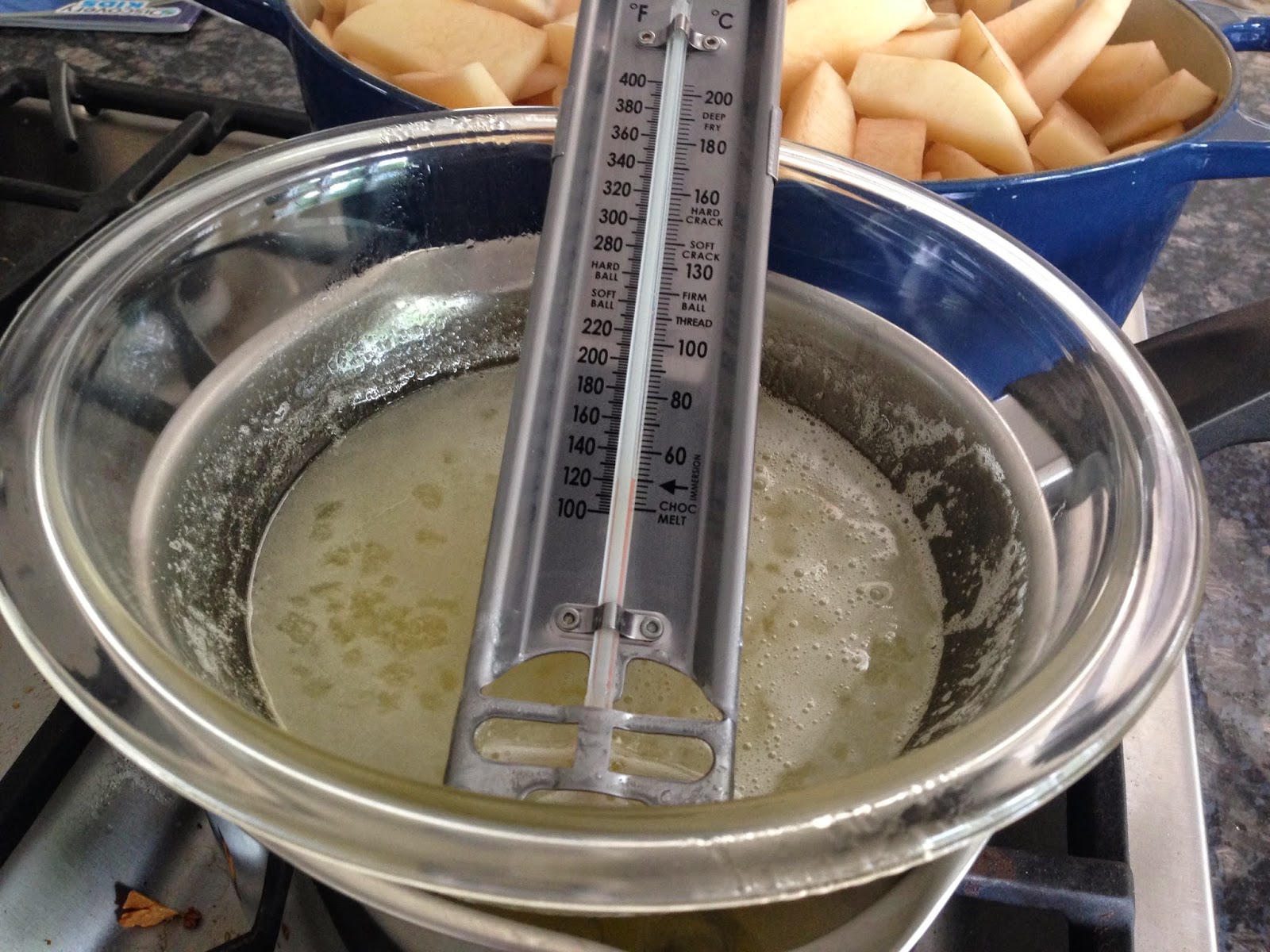 Transfer to mixing bowl and whip until stiff, glossy peaks form.  Add 2TBSP of lemon juice and whip just until the lemon juice is mixed in. 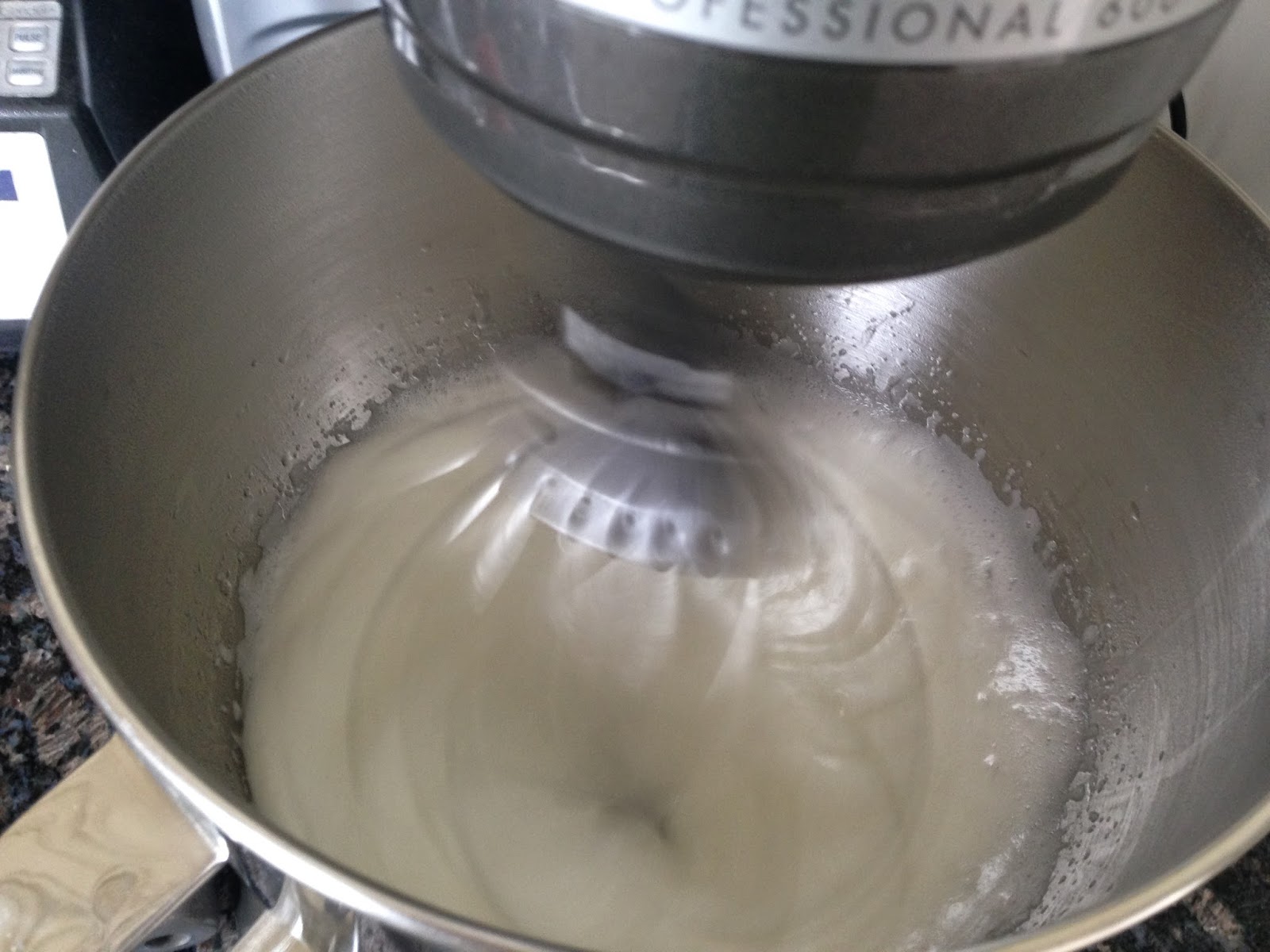 Spread on cake.  :)  I didn't frost the center layer of this cake.  It didn't need it, and the cakes themselves were a little on the fragile side and it was easier to stack them without worrying about a middle layer.  Next time I might try making a lemon curd for the middle- but with the lemon syrup poured onto the warm baked cakes (poke holes with a fork to help it not run off the sides) this cake is plenty sweet and lemony. 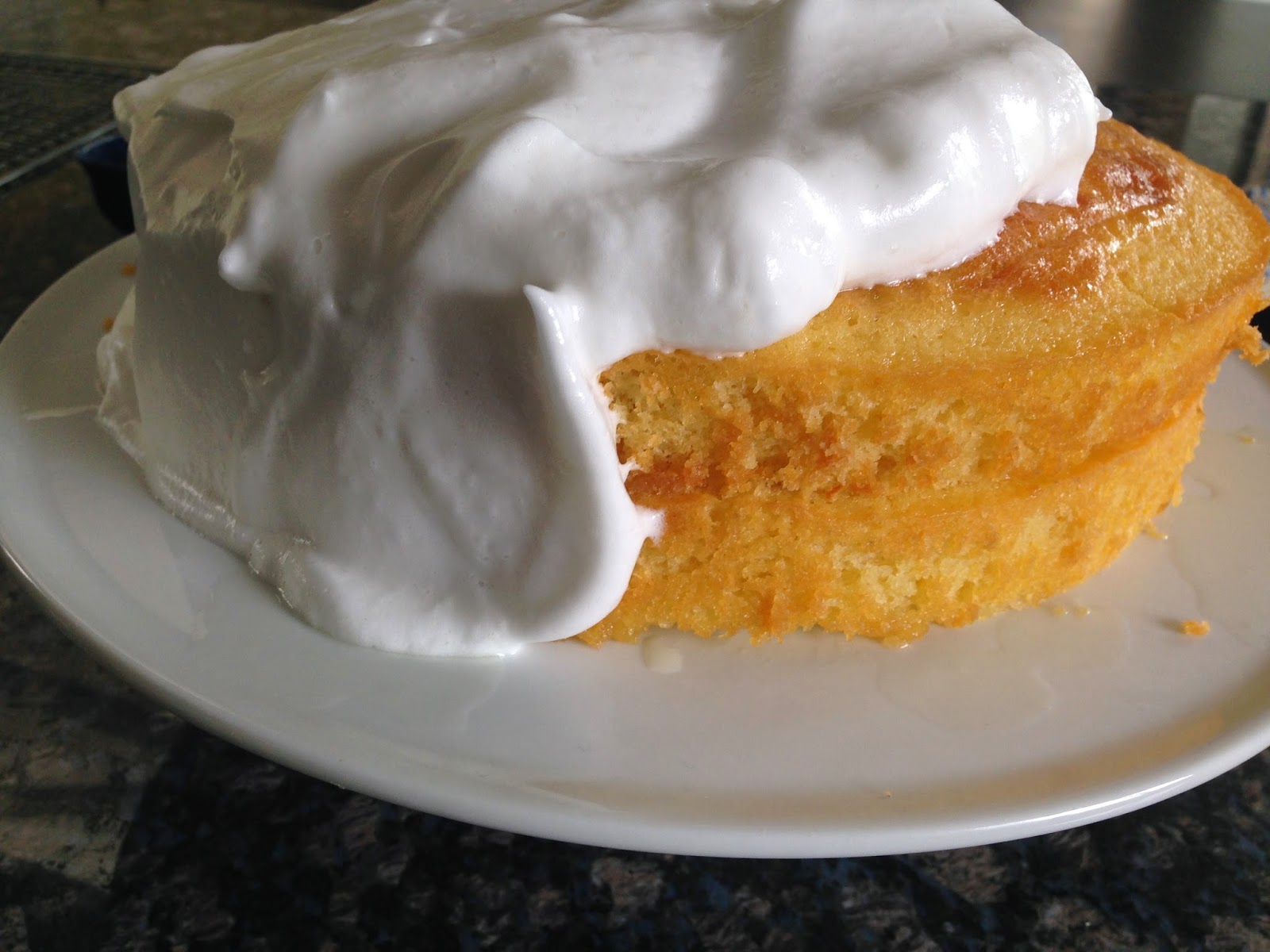 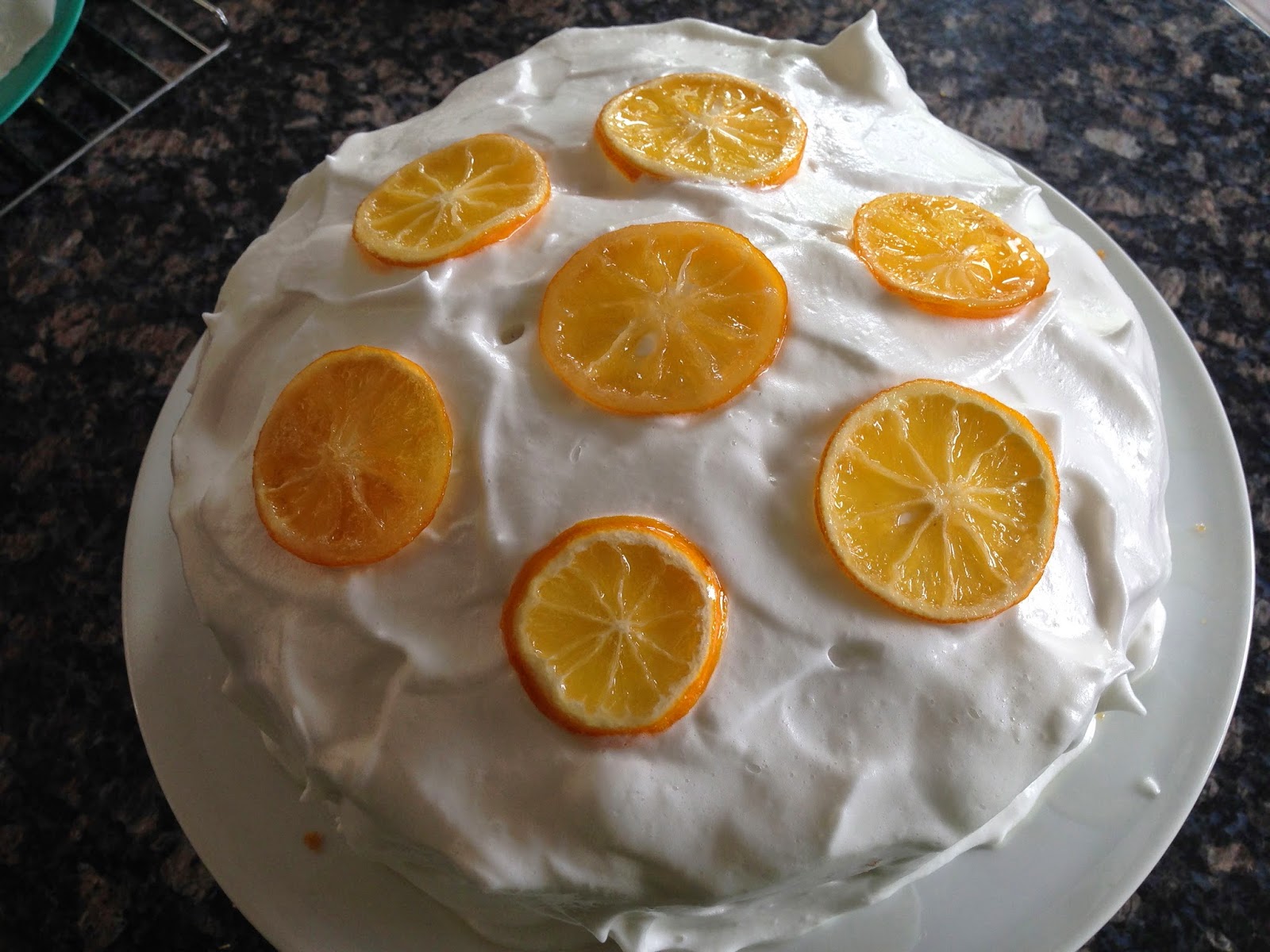 It may be different if you whip the frosting longer, but the cake was very reminiscent of a lemon meringue pie. 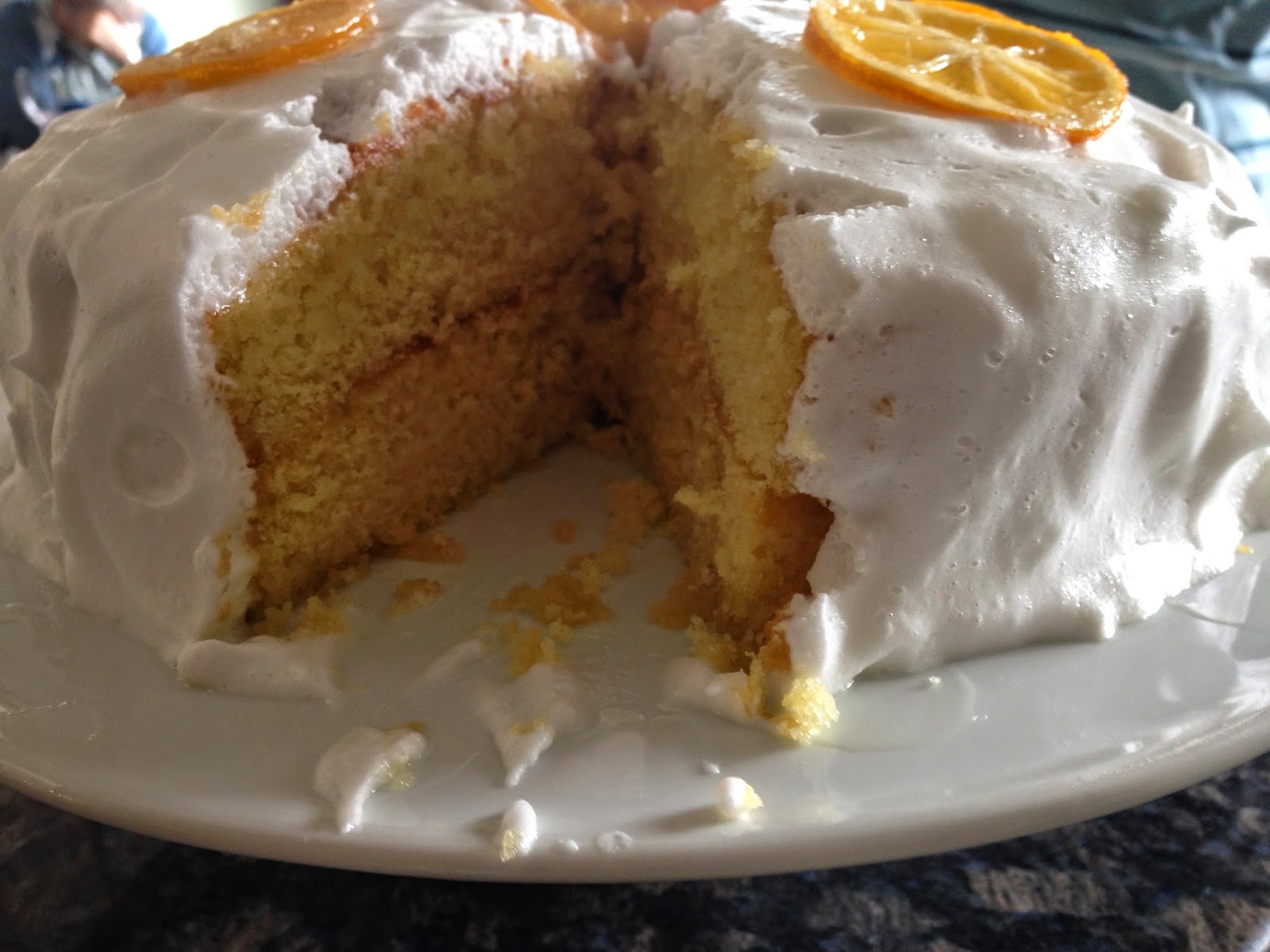 I made this as a pre-wedding wedding present for my friend, and actually made two since mint chocolate cake sounded like something I needed to eat as well.  It worked out nicely to have one cake to experiment with as far as frosting it.

I used two german chocolate cake mixes (for most basic cakes, cake mixes are as good as any made from scratch recipe I've found, my great grandmother agreed with me…) and baked them in four 9 inch round pans.  One set of cake pans have a removable bottom making it easy to get cakes out.  My other pans are tradition round cake pans, so I use coffee filters flattened in the bottom along with cooking spray, and the cakes came out perfectly.

Once the cakes were cooling on a rack, I started making the mint mousse.  I based it off the strawberry mousse recipe I love to use.  Instead of pureed fruit, I used whole milk, two or three drops of green food coloring, and 7 drops of peppermint oil to mix with the gelatin.  Once that began to thicken, I folded it into my whipped cream.  I think next time I will use cream, as this mousse was very light and airy, which went well with the heavy chocolate ganache, but I think cream would make it a little more finished.

I chilled the mousse in the fridge for half an hour and then spooned it onto my two bottom cake layers (I still only made one recipe of the mousse, because the original cake it was meant for had more layers, and there is plenty). 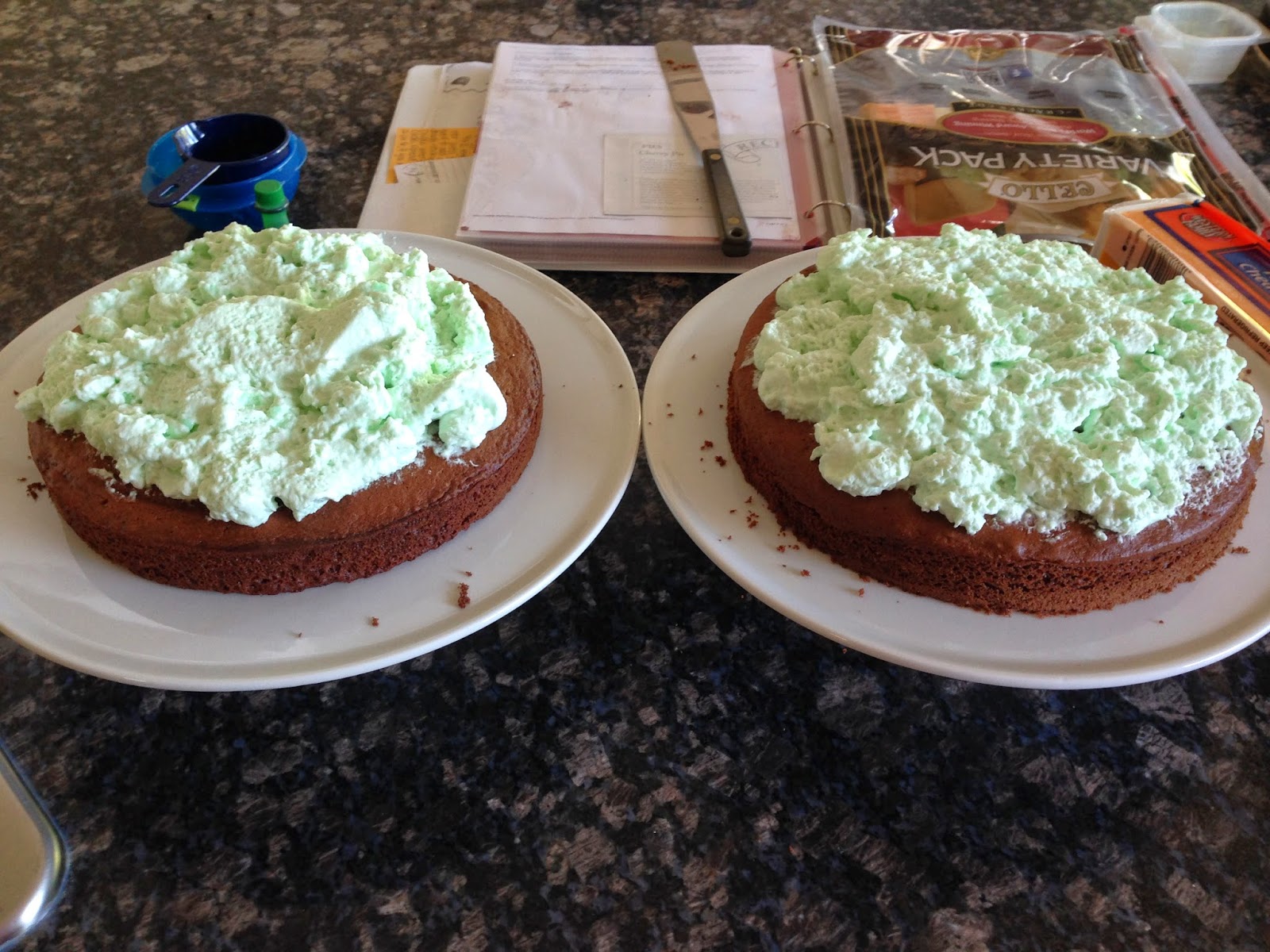 Carefully place the top layer on the mousse and chill cakes.

While the cakes are chilling, you can start on the frosting.  I used my standard buttercream (which means I whip a stick of softened butter until it's light and fluffy, then start adding powdered sugar and a little milk until I get a consistency I'm happy with.  For this cake I only used a couple tablespoons of butter and instead added in a block of cream cheese.  I think for the amount I made, I could have used two blocks, but the frosting turned out minty and smooth without an overpowering cream cheese flavor.  I added five or six drops of green food coloring- I wanted a pale green color- and 7 drops of peppermint oil.

After I frosted the cakes, I put them back in the fridge and started on the ganache.  I tried a new recipe, and will be using it in the future.

I doubled the recipe. I actually ended up using a 4 oz bar, and then another 4 oz of imdividally wrapped ghirardeli mint dark chocolates.  The mint chocolates gave the ganache just a hint of mint, and it was amazing.

I had a hard time piping mint frosting onto the top of the cake and had to take the bag apart, thin the frosting and start over with a new bag, and in the second attempt, the frosting was softer that I would have liked it, but I didn't want to stop and try again, so I just went with it.

To top it all of I used my cheese slicer to shave Andes mints over the top of the cake. 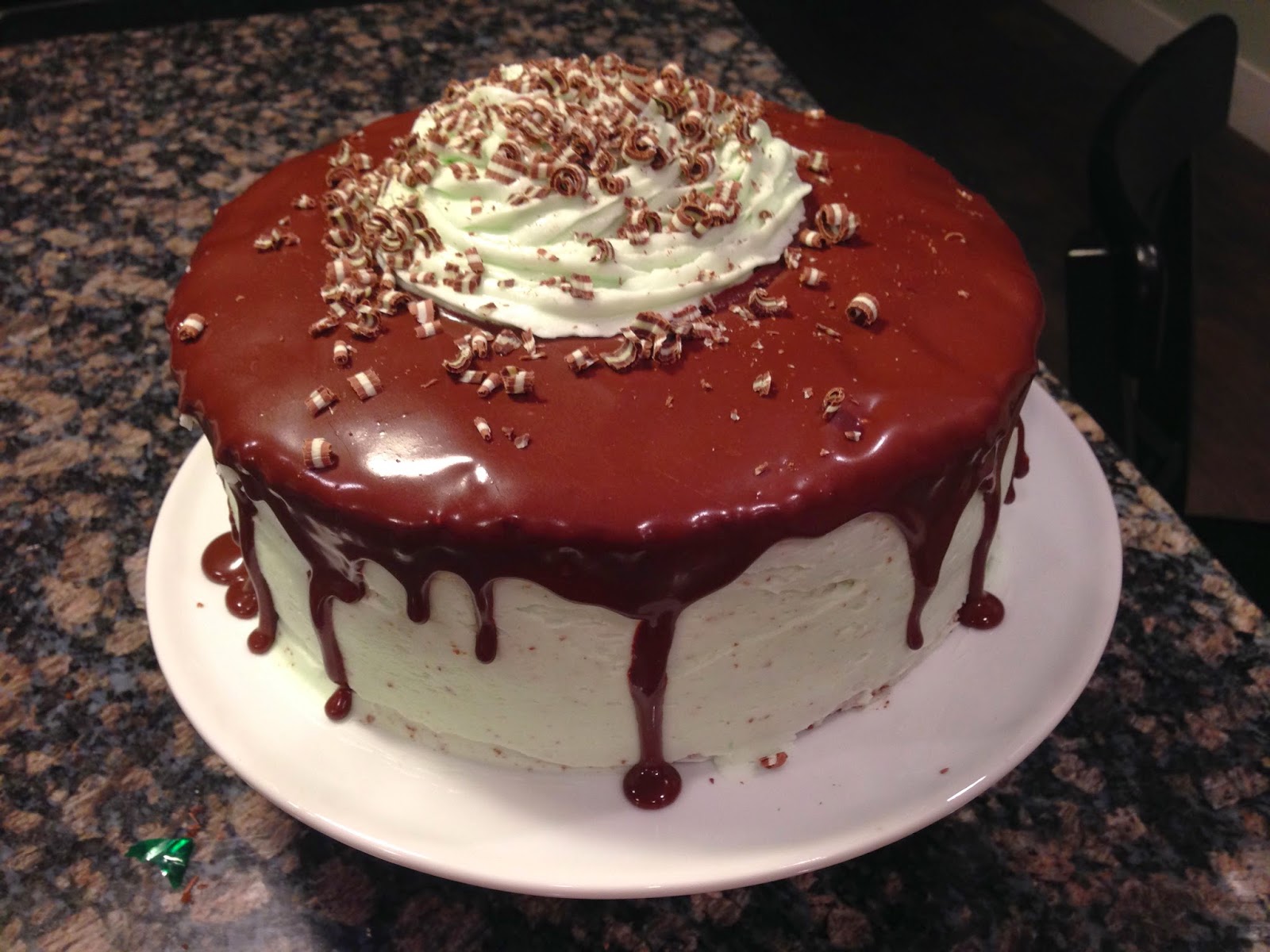 I wouldn't say it's my most beautiful cake (mostly because the soft frosting didn't stand up well enough on the top, and it's slightly off center), but the pale green is lovely against the chocolate ganache, and the whole thing was incredibly delicious.