I'm off somewhere.  Yesterday, we all woke up, and I felt bad that I didn't make my Mister a special Father's Day breakfast (because I was sick).  It was only today that I realized I was a week off.  In case I forget, or get off again, I thought I'd post this while I was thinking about it.

Some of my memories of my dad:

Sometimes I think my dad buys too many gifts, I used to try to stifle it more with my kids (and I do still encourage non-purchased gifts with my kids- like reading or playing with them) but I've learned that buying presents is one of the ways he shows love.

Once when I was sick (and this happened pretty much every time I was sick, but this one really stands out), he brought me a My Little Pony play set, that included a cloud that really rained.  It really made me feel better.

In Montessori school, someone had made fun of me, and I came home crying.  My dad told me I didn't have to go back if I didn't want to.  I did go back, but it was nice to know that my dad wasn't going to make me.

Once when I was too old for my dad to be carrying around (I thought anyway), I tripped while out on a walk with him, and skinned my knees pretty bad, my dad picked me up and carried me home.

I had invited my friend Jessica to sleep over, my dad drove me up to her house to pick her up, but instead of going on the road, he cut through the dirt field behind our house.  To get up to the street  (and back down again) he had to maneuver a sharp 3-foot-high incline.  It was awesome.

As a teen, I was jealous of all the cool activities the young men/scouts got to do, but not to worry, my dad took all the young women and leaders backpacking in southern utah (twice I think).  We called them, the "It is fair, hike".

In college, my dad drove an hour and a half just to take me shopping and out to dinner at the nicest restaurant in town.  Daddy/Daughter dates were the best.

On one Daddy/Daughter date, (well maybe more than one), he took me shopping for some new clothes, I tried on a huge stack of things and when it came time to pick what I wanted to buy, he suggested we buy them all.

I always thought my dad had amazing taste in clothing.  Turns out he used to just buy whatever outfit the mannequin was wearing.

The only time I questioned my dad's taste in clothing was when he wore his maroon shirt with red suspenders (he's colorblind, and thought they were the same color).

My dad is always helping those around him.  His heart hurts to see anyone in pain, or going without.

One of the nicest examples I can think of of what kind of man my dad is:  At book club last week, I was talking with some of my friends, and one (who has known my parents for a long time) told me about a funny article written by LDS satire columnist Robert Kirby.  Five Kinds of Mormons and I'll give a short overview (but for the full thing, read the link):

Liberal Mormons-not necessarily politically liberal, just not considered mainstream by the other mormons.

Genuine Mormons- practically invisible because of their low-key approach to the gospel. That and because they are rarely found at home, almost always being off helping others through some trial or other. GMs operate out of love instead of guilt. (there's only 12 of these in the world, and four of them are the three Nephites and John the beloved)


Conservative Mormons- the largest group of the 5 categories.  Most mormons, especially in Utah are this type.

Nazi Mormons- Those of the "God is a BYU alumnus" sort.

ANYWAY, my friend said, George is a Genuine Mormon.  It's true, whenever he hears about a problem, he asks what he can do to help.  He cares about people.

Thanks for teaching me to care about other people.  Thanks for showing me that I can love the Gospel, even when I don't have answers for all of my questions.

I haven't had my camera around lately, but I finally went out with my phone and took some pictures.  The corn and beans are up, a little (although I just chased some boys (not my own) out of my garden, what was up with that?).  A couple of squash plants around the perimeter are up, but I'm getting a little worried that not more are sprouting yet.  My plan was to have a barrier of squash vines surrounding the corn and beans to discourage critters from going in and eating all the corn again this year... 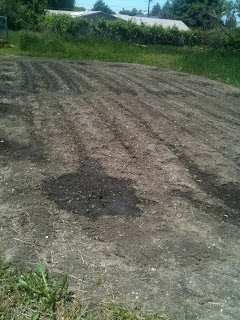 One of the few pumpkin plants that are up. 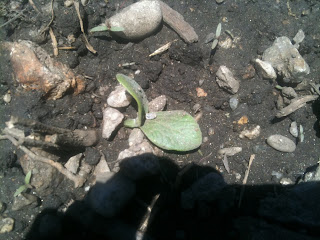 Black Caps.  They've liked all the rain apparently, because I haven't seen them so healthy in years.  I need to make sure I continue to water them so we get good berries.  One of my longer-term goals involves getting starts of these berries for my own garden.  It's a very old variety, they're seedy, but they taste sooo good. 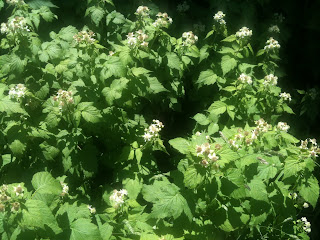 Our bees are loving the black cap blossoms.  Look close, lower, middle of the picture. 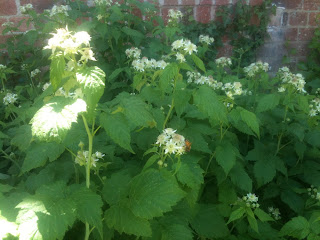 Artichoke plant- I'm counting on lots of artichokes.  (I'd better get one good sized meal out of it anyway.) 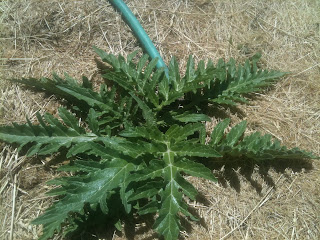 Peas.  I planted these early, and they didn't do anything, but they're finally taking off, and blooming, so we should get peas here soon. 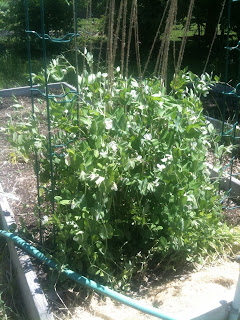 Strawberry patch.  It's nearly filled the whole raised bed.  The berries are looking nice, shouldn't be too much longer until we're picking strawberries too! 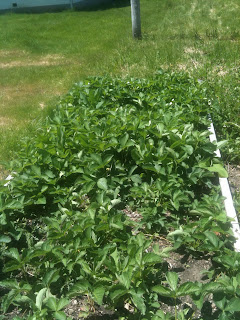 Chickens. They must sense what's coming, they all tried to hide from me. 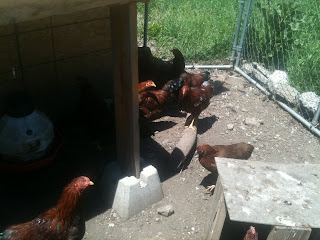 My Mister found this in the free section of KSL classifieds.  We'll hook a hose up (and clean it really good) and use it for our work station tomorrow when the roosters buy the farm.  Taja is enjoying sniffing around the garden, it was hard to get pictures, because she wanted to be in so many of them.  Silly dog. 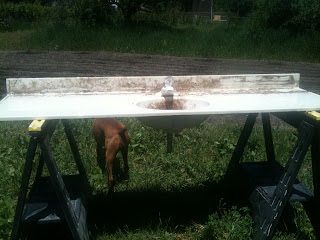 In college one of the "fancier" meals my roommates and I prepared was creamy chicken on rice.  With a side of green beans, and rhodes rolls.

I have several happy chickens that I cooked in the crock pot recently, that are or were waiting in the fridge to have the meat pulled off the bones, and this dinner sounded good.

The original dinner is made by cooking chicken breast in the george foreman grill, then smothering it in a can of cream of chicken soup, and putting the whole thing over white rice. Here's my grown-up version (I do sometimes use cream of whatever soup, but they're really terrible for you, and don't actually taste all that great, so I try to avoid them).

4 TBSP Butter
4 TBSP Flour
2 TBSP Chicken Base (I like this better than bouillon, I get mine at costco)
4 C milk
2 cloves Garlic, minced
2 C shredded chicken
Rice

Melt 4 TBSP of butter in pan, add 2 TBSP of chicken base, Add flour until all the butter/base is absorbed (somewhere around 4 TBSP). Slowly whisk in 4 C of milk, a half cup or so at a time, stir over low heat until thickened. Add minced garlic to taste (I used one clove, but two would have been better). Add cooked chicken (about 2 cubs shredded, but adjust according to how much chicken your family likes) and heat over low until chicken is warm. Don't let it boil or the gravy will be lumpy.

Serve over rice, I used a mix of 2/3 brown rice and 1/3 wild rice mix. Serve with a vegetable (we had broccoli and peas, separately, because I had tiny amounts left in the freezer of both...). I had a little, then went to a meeting, then on a bike ride, and when I finally got home, it was all gone, so I guess everyone liked it. Next time I'd increase the recipe a bit for my family of 6 (even the baby ate it).
Posted by Alice at 9:25 AM 3 comments: