I've gotten a little behind with my plans for this winter.  I had intended to plant lettuce under our grow lights and have not yet.  I intended to take cuttings from the grape vines, and haven't.  My other to-do project this winter was get bees ordered.

That, I actually did, which means my Mister needs to get hopping (as soon as he is healthy again) and build a hive.  We've decided to use a Top Bar Hive instead of the traditional type of hive.  The honey production is slightly lower, but it's much easier to use, cheaper (especially since mr. can build it himself) and produces lots of wax that we can use.  I'm looking into making those wickless candle square refill things....  The harvesting of the honey is also much easier, since we don't need any special equipment.  A potato masher, cheesecloth for straining out the wax, some clean buckets, and the sunshine should take care of the entire process.

The bees will arrive in april, and we're looking forward to adding them to our suburban homestead.
Posted by Alice at 3:39 PM No comments: 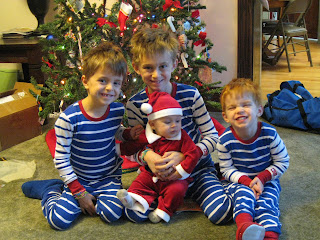 Merry Christmas to our friends and family!  I thought I'd make things easier on myself by putting a link to my blog in our christmas card, and not sending a million copies of our christmas letter around.  Also, I didn't write a christmas letter.  I sat down to start one, but was interrupted in the first attempt by J throwing up.  The next week when I sat down to do it again, my Mister and A had come down with the flu.  The funny thing is that I've put off writing anything on my blog because after nursing sick people for two weeks, I am sick, along with CP and baby E.

Due to my lack of sleep/general achyness, I can't really remember everything that happened this year.  My most recent memories involve trying to get the binky to stay put in baby E's ear, until it dawned on me that that was not where binky's go, and taking a handful of wet burp rags to the garbage can instead of the laundry.  (I caught myself in time).  Remind me not to hold the baby when trying to do anything else, or he's likely to end up in the bread box or something.

The second-biggest thing we did this year was, after unsuccessfully trying to sell our home for a year, we decided to try the rental market, and had renters within a week or two.  We then moved in with my parents, and are now living in their home while they are on an LDS mission in the Lima Peru Temple.  We miss them, but are glad they're doing something they love and serving in a wonderful area.  (My Mister also served his mission in Peru, which has J (age 9) very excited about serving a mission in Peru someday also.)

We're currently crossing our fingers and jumping through hoops in hopes of building our dream home on some family owned property adjacent to my parents' house.  Send good building thoughts our way, and also to the city council and planning commission.

J (age 9) is in 4th grade this year, and has a wonderful teacher.  We love her!  He's growing up so much- the other day I looked at him, and couldn't take my eyes off of him.  I can see signs of maturity.  Luckily he still wants to snuggle with mom on occasion.  His favorite things are his wii games, (preferably anything lego), his bike, and books in the Percy Jackson and the Olympians set.  For christmas his brother bought him The Heroes of Olympus, Book One: The Lost Hero

, by the same author, and he's loving it.  J also likes basketball and soccer, and can't pick one over the other, which makes for a couple of crazy weeks when the two overlap.

A (age 6 11/12ths) is loving first grade, although he has decided that kindergarten was "more fun".  He's learning to be independent and is testing limits, which has been an adventure, but he's also the first to give me a hug and a grin.  A also played soccer and basketball for the first time this year.  We're hoping he can pick a favorite, but we're not holding our breath.  My Mister has been giving him piano lessons here and there, and he thinks that's pretty neat too.  His absolute favorite thing to do is build things, whether it's "paper wallets" (mom has had to be really careful about throwing random papers away in case A has stuck his life savings inside), or working on his miniature tool bench that he got for christmas last year, or building forts around the yard.  If you come to our house, you'll see off the front porch an elaborate system of rope, wood and cardboard boxes.  A also enjoys playing with legos and does that pretty much anytime he can't go outside to build something.

CP is 3, and continues to be a fun and happy kid.  We've enjoyed nearly everything about him for his entire life.  He likes to help A build things, and play on mom's ipod.  He's gotten pretty good at some of the puzzle games, which has convinced mom that he's going to grow up to be a genius.  He likes to "play toys", and will do pretty much whatever his older brothers will let him tag along for.

Baby E (about 5 months) is an adorable baby (he's the biggest thing we did this year!), but we wish he'd sleep more.  He likes to be held and played with constantly (I can't blame him, we're a fun family- who'd want to be stuck of in a baby chair at the side of the room!).  He can roll over from front to back, and gives the best baby smiles.  He was doing pretty well sleeping until we messed up his schedule by taking him to Oregon for Thanksgiving, he still hasn't forgiven us for that car ride, and wakes us up several times a night to remind us not to do that again anytime soon.

We hope you all had a peaceful Christmas.

Perhaps the rest of the year, when I don't think so much about buying STUFF, it's easier to not think about those who can't buy necessities, let alone, STUFF.  It hurts my heart to think of anyone sleeping outside right now.  I just walked around the corner to pick my preschooler up from his playgroup, and by the time I got home my fingers were freezing.


If it hurts your heart too, consider making a donation to The Road Home.  You can donate money online, you can also drop off in-kind donations at:

210 South Rio Grande Street (455 West)
Salt Lake City
Some of the things they need the most are: all sizes of hats, jackets, coats, socks, (new) underwear, blankets, larger sizes of diapers, towels, pillows.  There is a whole list of things they are in need of.
Posted by Alice at 1:26 PM 2 comments:

Picture Round Up (Thanksgiving and beyond)

We spent Thanksgiving with my Mister's brothers in Oregon again this year.  We went to the Portland Japanese gardens.  The gardens were beautiful, and made me wish we could have a yard like them. 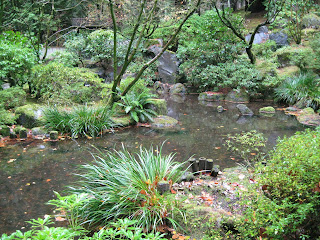 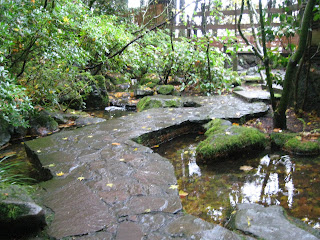 J wanted to have a picture of just him in front of this zen garden, but cousins kept popping into the picture.  When he finally got some space, he posed triumphantly. 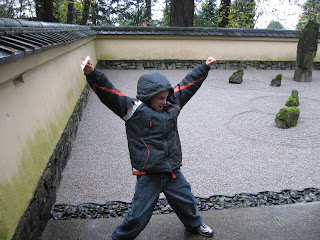 We also went to the Oregon Coast Aquarium.  Here are how my boys measure up to seabirds. 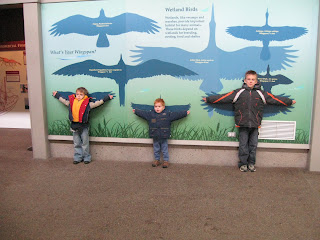 We were able to watch some of the animals being fed, and doing tricks.  The trainers said that learning tricks keeps the animals from getting bored.  The tricks sure kept us entertained! 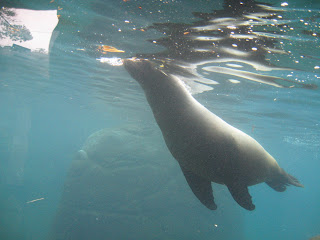 Me, my boys (baby E is in the bottom of the double stroller), and A's new best friend, cousin C. 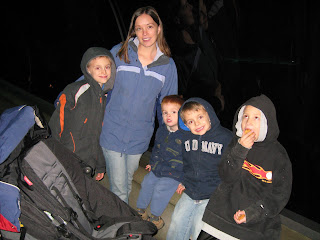 We're in the shark tunnel.  Sharks above, and the sides, and underneath.  The underneath sharks were hard to see unless you got down for a close-up. 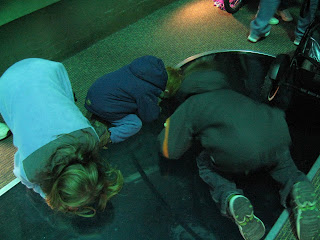 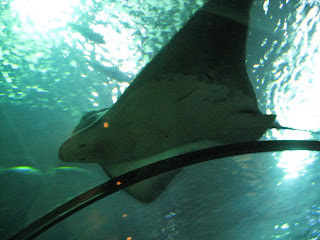 Some boys got eaten. 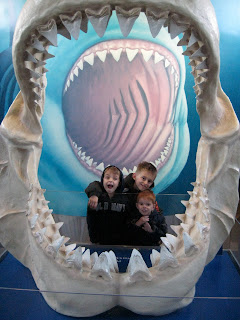 Baby E, and his cousin Baby C who were born 11 hours apart on the same day. 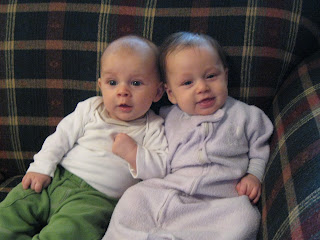 We had quite an adventure coming home from oregon.  There was a big storm, and the road we needed was closed, so we spent the night at the Best Western in Jerome Idaho.  It was really nice, if you ever need a place to stay in Jerome, I highly recommend it.  The kids had a blast.  There's nothing like staying up late, eating microwave popcorn in bed and watching TV in a hotel.
Once we were home and had a week or so to settle down, we got out the Christmas decorations.  We bought the tree (in oregon) 9 years ago, for $10.  Every year I think it looks pretty bad, and think about replacing it with something a little nicer, and something pre-lit.  But, every year we get it decorated with all the things the kids have made over the years, and it doesn't look too bad.  So I decide to save my money.  My Mister and I wrapped the presents.  CP's present is as big as he is, and when he saw it, he pumped his arms up and down in the air.  His comment after the decorations were all up was, "Is Santa here YET?!"  He's also very concerned about the snow melting, for some reason he thinks that it can only be Christmas time if there is snow on the ground. 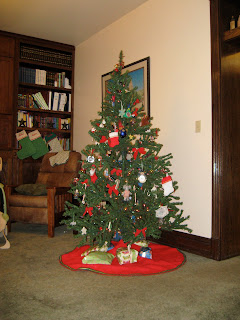 We set up my nativity, and pinecone garland on the bookshelf in front of the greenhouse. 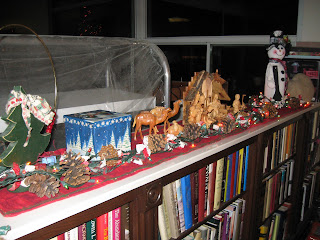 It's been a few years since the outside of this house had any decorations.  When I was a kid, I remember my dad climbing the huge pine trees in the yard and putting lights everywhere.  My Mister declined to do such a thing.  (I don't know why, as if he has anything else to do...) 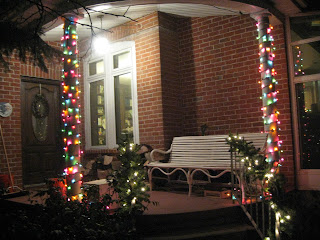 We took down the Peruvian hat that the buffalo was wearing in honor of my parents, and put the santa hat.  Hopefully it doesn't scare off the reindeer. 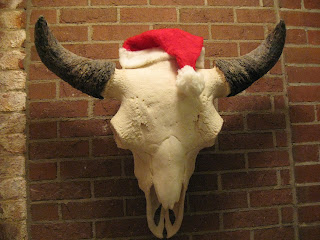