What do I do with 80 pounds of chicken?

For the last several years, I tried really hard to only buy farm-raised meat.  After watching a few too many documentaries highlighting to horrible conditions of factory farmed meat, I was done.

In practice, what has happened is that we've pretty much stopped eating chicken, aside from the occasional cheat with a costco rotisserie chicken.  We tried raising our own meat birds, and buying them from a local-ish farm.  But in the end, they always ended up being so expensive that we just couldn't afford to eat chicken very often.

I'm giving up.  At least for now.  After reading several positive reviews of Zaycon Foods, I decided to give them a try, and ordered two cases of chicken.

I picked up my chicken today and got to work.  This morning I made sure to set out all my supplies.  Clean jars (with lids and rings ready to go), trays and wax paper for freezing individual breasts (then I'll put them all in gallon sized freezer bags), a cutting board and scissors and a knife.  I also had a big bowl for scraps, and disinfectant wipes for just in case.  I also put 1/2 cup or so of water into each quart jar.  I've read instructions that say to top off the jars with water after, and instructions that say that chicken creates it's own liquid so adding water is unnecessary, and I've read that the chicken doesn't always create quite enough liquid, so adding a little is helpful.  I went with the latter. 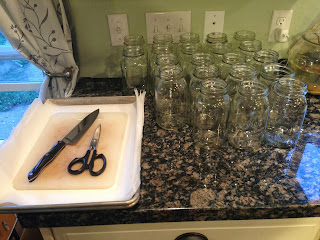 Two big drippy boxes of raw chicken breasts.  The breasts were large and had some fat that needed to be trimmed off, but were really not too bad.  I cut them in half, trimmed them up, and cubed them for jars or just left them in individual breasts for freezing. 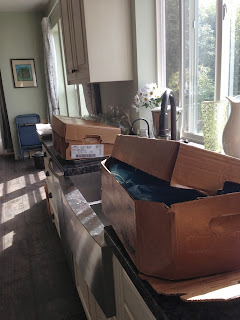 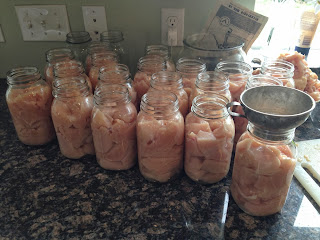 Add 1 tsp of salt to each quart.  (I used canning salt because regular salt will cloud the liquid in the jar, but for chicken, I really don't think it matters, it ends up cloudy looking anyway... 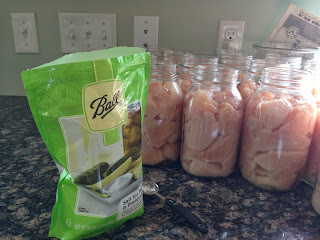 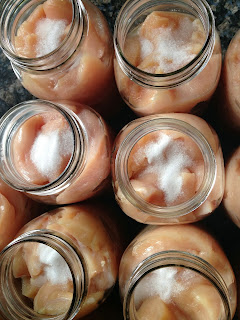 Usually when I wipe jar tops, I just use a damp rag, but chicken is slimy, so I opted for a disposable paper towel and vinegar. 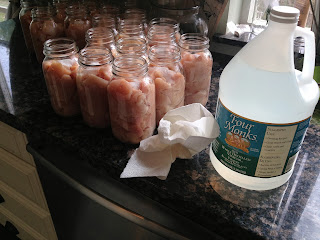 Add lids (I put mind in water, bring it to a boil, let them boil for a short while then put them on). 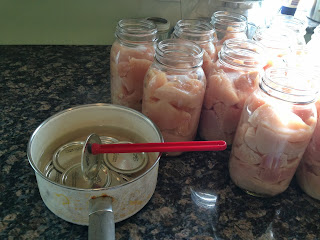 Add rings, and place them in your pressure canner.  Make sure to follow the instructions that came with your canner.  I bring the canner to a boil, put on the lid, wait for a steady stream of steam, then set the timer for 10 minutes.  After that I add the weight/stop to the lid and watch until the pressure gets to around 13 pounds psi.  Then I set the timer for 90 minutes.  I'm a little neurotic and checked the three canners I had going today every few minutes to make adjustments to the heat to keep the pressure in the right range. 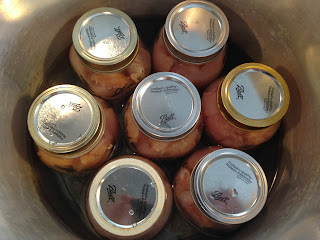 Once the 90 minutes is up, turn off the heat and wait until the pressure gauge reads zero.  DO NOT REMOVE THE WEIGHT OR THE LID BEFORE THAT.  It sucks out the liquid from your jar, and also, will hurt you.  Once the pressure is gone to zero, carefully (you may want to wear an oven mitt just in case) remove the weight and the lid and using a jar lifter, move the jars to a safe place to cool down.  When they're cool check for seal, and any that don't seal should go in the fridge (I'd say reprocess them, but really, after 90 minutes, there's no way I'm redoing that for one jar that didn't seal.  We'll just eat it up this week). 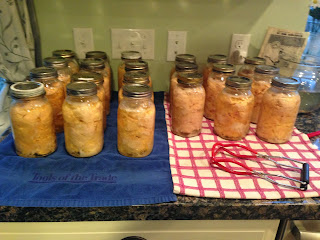 I didn't take any pictures of the chicken that went in the freezer, because of slimy raw chicken juice everywhere, but I canned 40 pounds of chicken, and froze the other 40 pounds.  I used trays and wax paper, stacking them up so they'd all freeze individually to make them easy to put into bags later.

In the beginning of to 80 pounds of chicken, I cut really carefully so I didn't waste anything.  Toward the end I got a little sloppy.  I gathered up all the fatty chicken scraps and put them in the crock pot, covered them with water and stuck in some veggies that I happened to have on hand.  The crock pot is pretty full, and I haven't quite decided whether to make a huge pot of soup and eat it right away or try adding carrots/celery/onions and canning chicken noodle-less soup. 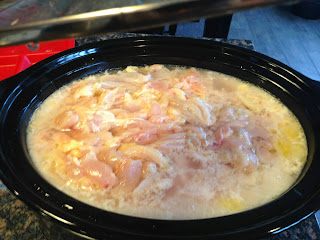 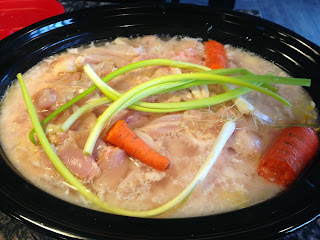 All in all- it wasn't as bad as I thought it would be, and now I have a shelf full of canned chicken and a freezer full of frozen chicken breasts.
Posted by Alice at 11:42 PM No comments: